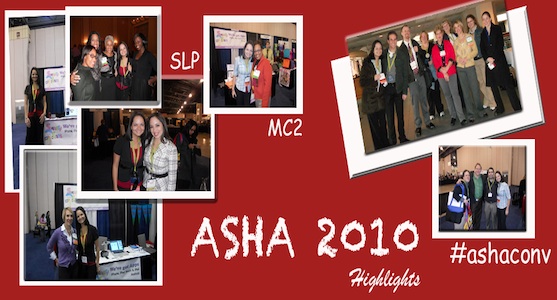 It is hard to believe that the ASHA convention (AKA #ashaconv) is already over. I arrived in Philly Wednesday night, and I am now (Saturday) on an airplane on my way to Tokyo, Japan. This was by far, the best of my 6 times at the #ashaconv.

Side Note: If you are not a twitter user, #ashaconv was the “hashtag” we used to tag all ASHA’sconvention-related posts on twitter.

So much happened to me in Philly in two days that I am still trying to wrap my head around it, (and) it was a lot of fun.

The expectation: Being a social media enthusiast, there were several people I was looking forward to meeting in “real life”. I chat and tweet with so many people on a daily basis on the Internet, that sometimes it feels like we already know each other in real life, or even more, that we are best friends. I looked forward to meeting famous people such as Samuel Senott (the creator of Proloquo2go) and Sean J. Sweeney the “Speech Techie” as well as friends I had not seen since the last ASHA convention, and meet a few of the other app developers and my #slpeeps (also from twitter) at the tweetup organized by ASHA. My biggest question was: will anyone recognize me as @geekslp?

The arrival: After many hours on an airplane without Internet, I arrived in Philly and headed straight to the convention center in downtown. After dragging my luggage around (for a while), I arrived at the registration booth where I was able to pick up my badge and register my booth. This was the first time I got to have a booth at the ASHA convention, but the process went very smoothly. Setting up was also easy, just put my signs up and headed back to the hotel where I was able to rest for my first day at ASHA, showing the apps I had developed over the last year.

The first day: I love the feeling of walking around the convention center every year when I go to ASHA. I feel the energy of highly motivated individuals with one goal in mind: learn to become a better professional and share their knowledge with others. These are three days of intensive learning and sharing; you can definitely feel the “vibe”. On my first day I had several of my virtual friends stop by my booth to greet me. I discovered that folks such as Maggie from ASHA, Jose Ortiz from Pal Software, Samuel Senott, Jeffrey Johnson from Grembe apps were not only a lot of fun online but also in person. Many people claim that the Internet has been taking away some of the social interaction, but for me it has created an enormous opportunity for meeting some very interesting individuals.

I tried to attend a presentation on apps, but since it is such a hot topic, the room was already full by the time I got there. After the exhibitors hall was closed it was time to head to the Hispanic Cactus meeting, and later that night it was time to get together with the folks from MC2 at the Marriot and get to visit with my friends from the ASHA’s Minority Student Leadership Program; which I had the chance to be a part of in 2006.

Ashaconv day 2: At 7 a.m. I was headed to the Overlook café at the convention center where we had a tweetup organized. Yes, it was a bit early, especially because I did not leave the convention center the night before until 11 p.m. This was a great time to meet some interesting people and laugh about how we look different in the real world. On day 2, I got to meet more of my social media friends, such as Jeremy Brown (a teacher attending ASHA convention) and I also got some attendees who would say, “ Oh! You are Geek SLP!” or “ Look! I already have one of the apps you designed.” At 5 p.m. and with a very hoarse voice (from talking nonstop) I had to head back to the airport for my flight back to Dallas.

I hope I get to see my virtual friends again next year, and get to meet some of the friends I will make until it is time for ASHA 2011, San Diego.