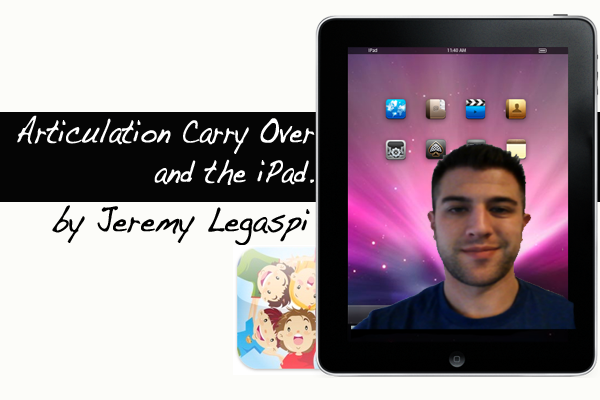 As I attempt to write my first ever Blog, and probably only Blog since this will most likely sink  into the Blog abyss , I hear my 10 month old son crying in the other room. With the announcement of the iPad2 I can’t imagine the Billion plus apps that will be available by the time he is ready to interact with perhaps dare I say it the iPad 5? That being said I am currently using the first iPad and literally use it with almost all of my clients. So without further adieu I present to you: Articulation  carry over with the iPad

I use the iPad  for speech therapy, using the array of speech therapy apps available, as well as a motivator for clients that I am using a more traditional approach with. For a majority of my clients the iPad is the first thing they ask for when they step foot into the therapy room. For some clients it even becomes a distraction causing tantrums if they aren’t allowed to use it.

I was recently asked by some parents what apps to use at home with their child. They wanted to know the specific ones I was using for therapy. For one particular client I was incorporating the use of Smarty Ear’s Articulate it! and Match2Say. The price of the app wasn’t a concern for them, they just wanted something to use ”so they could practice at home”.  I showed them the app and how to use it and which specific sounds and error patterns  we were targeting. We were using the Cycles approach and focusing this particular cycle on FCD of the /p/ phoneme.

I made a few hand outs explaining what Cycles were all about and the particular error patterns we were focusing on.  I now send reminder handouts home with them each week to carryover and practice at home.

Here is and example of Cycle #1 for my client J.P.

This week are are working on the phonological error called Final Consonant Deletion (FCD). J.P is not producing the /p/ sound on the end of his words. To work on this at home open up Articulate It on your iPad and select J.P. This week we are are working on the phonological error called Fronting. J.P is not producing the /k/ sound and is instead substituting it with the /t/ sound. To work on this at home open up Articulate It on your iPad and select J.P This week we are are working on the phonological error called Consonant Cluster Reduction. J.P is not producing a consonant when there are one ore more next to each other in a word. For example he says ‘room’ instead of ‘broom’ To work on this at home open up Articulate it! on your iPad and select J.P. This particular family was very good at carrying over  both  pen and paper type homework that was sent home as well as  properly using the iPad apps at home.  I have found that the families, I work with, that have iPads are more  likely to  follow through with carryover activities at home.  My client’s parents say that their child finds it much more engaging and rewarding than coloring activities or flashcards. I do however caution them not to make their child’s speech practice on the iPad  at home a passive activitiy and that the parents must interact and engage the child when they are practicing their sounds.  This is not saying that the families that can’t afford the iPad do not follow through, it is that the iPad offers the families that do have it another way of carrying through.  So when proper education is provided to the family, the iPad can prove to be a very useful and quite motivating tool to elicit carryover activities outside of therapy.

*The handouts shown above were created using the screen capture function on the iPad and then emailing the pics and importing them into a word document.  The handouts were fairly quick and simple to produce.

I hope you enjoyed my first adventure into the blogging world. Feel free to contact me with any questions. Jeremy Legaspi is a pediatric speech-language pathologist and  and he works at Upward a non-profit organiztion providing a school for special needs as well as a pediatric outpatient therapy clinic in Phoenix, Az.  He concentrate mostly on autism, AAC, artic/phonlogy, and dabble in some feeding. Follow him on twitter @azspeechguy

3 thoughts on “Articulation Carry Over and the iPad”