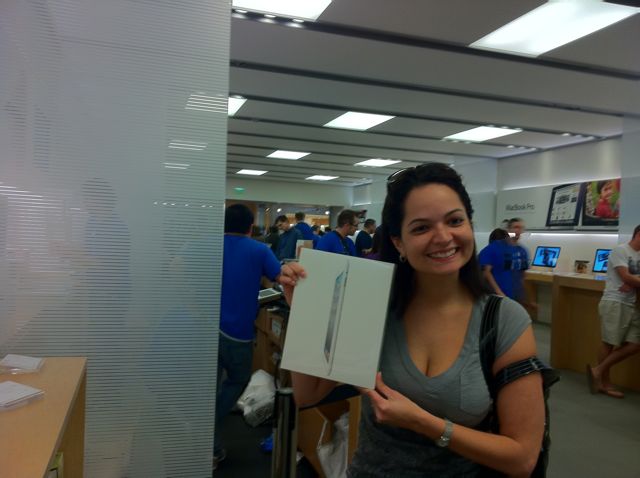 I love Apple. I know that this is a simple and geeky phrase to start this post. I am actually debating whether to go play with my iPad 2 or write this post, so I decided to write this post on my iPad 2.
The two and a half hours I waited in line to get my iPad 2 today were the best 2 and half hours of waiting time I have ever had in my life! (Better than Disney’s wait for a ride time). I met so many interesting people!!!!
Well, let me calm down and start from the beginning. But where is the beginning ??
When Apple announced the release of the iPad 2 , I was getting ready for my presentation at the Ball Room at the Texas Speech and Hearing Convention in Houston. So, despite my excitement I had to focus on getting ready for my presentation.
Yesterday, March 10th I visited Best Buy and Verizon to check if they were going to sell it. Verizon was out of the question; Best Buy told me they had 15 copies of the iPads.
Today, March 11th I woke up and thought: it is today! I know you are probably thinking I am such a GEEK! Yep! I am GeekSLP.
I had planned to head to the Apple store at 3 p.m. today, but when I started posting on Facebook about it; people got me nervous and made me head out of my house at 2pm. I was rushing to my car, while thinking where will I go??? I had two options:
1. Apple store: Packed with crazy people like me, but more devices;
2. Best Buy: Less people, but probably a lot less devices;
So decided that since I was set on getting a 3G iPad, I would probably have a bigger chance to get it at the Apple store.
So, I headed to the Apple Store at Knox St, here in Dallas. I am lucky; the DFW area has 6 Apple stores. I have to tell you, while driving I was paranoid that everyone in traffic was going to the same place as I was, so I had to pass them. 😉
When I get there: Guess what? The store is closed. Yes! CLOSED! They are renovating the store.
Well, since I am GeekSLP, I got my iPad 1 and searched for the closest Apple store near me. 4 miles away! Here I go!
Once I get there. See photo bellow, I am thinking, ”wow! Look at all these people with tents and chairs” There are people out there even more fanatic than me. I have to tell this to my friends!”. At first, it did not seem like too many people, so I kept trying to find the end of the line: well, 150 people. Not too bad- I thought! I may have a chance to get my hands on one iPad 2. I am flexible, as long as it is a 3G iPad I don’t care how much memory it has or the color. It was about 3:30 by then.
While waiting in line, I had to talk to everyone around me. Yes! That’s me. I realize that everyone in the line were just so interesting (of course they had to be Apple users).

Fun, funny, and nice people! One of the guys did not believe I made apps. So, I had to pull up the GeekSLP app and show my photo on it! It was a pleasure! Someone right in front of me was a book writer, with a very interesting tittle and I wish I had written it down.
By 4:30 Pm. Someone from Apple ( probably the manager) walked out and said: “ ARE YOU GUYS EXCITED!?” well… we all were so we all screamed!!!! (Including me).
He said: “ we have iPad to all of you here!”. MAN! I was happy. Behind me: 300 people! Yep you heard it right: three hundred people behind me on the line.
The line started moving fairly quickly after 5 pm. When I got close to the entrance ( see photo). Someone walks out saying: “ we are running pretty low on 3G iPads”. I got sad.
I really want to get my iPad today!
Now it was my turn to walk in the store. This lady, such a nice lady is assigned to me and asks which iPad would you like:
I respond: “ White, 3G, 32G”. She asks: “ Verizon or AT&T. I respond:
“ what is the difference in the plans?”.
Can you believe I had to not researched that before hand? I completely forgot that now Apple was available on Verizon too.
Well, after she showed me the price charts: it was clear that Verizon was the best way to go.
So, I go my Verizon 32G, white iPad! I walked out of the store feeling so happy, after having met so many fanatics like me (or worse).
Five minutes later it occurs to me: wait a minute! I already have unlimited internet with AT&T, why did I get Verizon iPad???
Let me run back to the Apple store.
Here I was back to the store: what did I hear? “You would have to go back in line to exchange.”
I decide to go home! Well, when I get home I call the Apple store and explain the mistake. They tell me : “ENJOY YOUR IPAD… DO ANYTHING YOU LIKE TO IT AND COME BACK TO THE STORE TOMORROW NOON AND WE WILL EXCHANGE IT FOR YOUR At&t iPad when it becomes available. Use it as it is yours and you have 14 days to play with it. Make sure you back up your videos and photos before you come in and exchange it.”