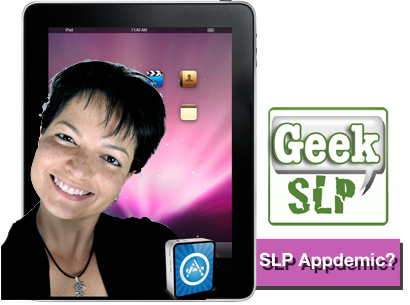 Apps Favorites For developers Presentations Recent Posts Smarty Ears Apps The Geek Who is she?
May 31, 2011August 17, 2011 geekslp 13 Comments It seemed like just an ordinary day back in November of 2009, when I was playing with my iPhone and I was thunderstruck with an epiphany to create apps for speech therapists. As the iLighbulbs flashed above my head I envisioned an app that would provide therapists with the ability to select specific phonemes and have all their flashcards stored on their iPhones. For some people an idea like this can feel farfetched, but for me a self professed geek, having already designed several websites from a young age, and understanding html very well, learning what it would take to put my ideas in action was not an obstacle that I would let get in my way. With nonstop dedication, and night after night working tirelessly my first app –and the very first app for speech therapists– was born; like a proud mother, I still remember that precise joyful moment on January 2nd of 2010. The app was called Mobile Articulation Probes (now renamed Smarty Speech), and it was on sale on iTunes for $29.99; and I was elated and ecstatic. Still feeling the momentum of creating something so new and useful I signed up for a booth  that very same month for the Texas Speech and Hearing convention happening in March, and I could not wait to see the faces of excitement from my fellow SLPs when I showed them what my app could offer them in therapy.

But I didn’t take five seconds for myself to breathe between January and March as I was working nonstop on creating 5 other apps (WhQuestions, Age calculator, yes/no, iTake Turns, iPractice Verbs).  I was a woman on a mission. I could feel the difference these apps made in therapy rippling through my veins and I wanted to see every aspect of therapy utilize the potential of this powerful device. Despite the fact that maybe 10 to 20% of TSHA attendees that year owned an iPhone or iPod touch, it had appeared nobody had even ever considered using it for therapy!  Oh, I forgot to say: all this happened before the iPad (yes, there was life before iPad).

I loved to see the reaction of my fellow SLPs when I showed them what the app could do. A lot of people instantly recognized it was a deal: 450 flashcards organized by sounds with data tracking capabilities. This would probably cost us around $200 if we buy paper flashcards (not to mention that they don’t come with data tracking capabilities). Other attendees were apprehensive at such a change, they thought it was too expensive. The reality was: most of iPhone apps I knew were less than one dollar; so I could see where they were coming from. No matter if they loved it or not, one thing was universal—their eyes bulged wide open with amazement as if they were looking at an alien, and more often than not that look of surprise turned to a smile when they saw this “alien technology” for therapy was on something they might already own—an iPhone. Today- a little over one year- that app on its original state would be considered outdated.

I believe that at that time if you searched the key word “Speech therapy” on the app store probably 80% of apps there were developed by me. 😉 – well, there were probably only 8 apps available.

In May of 2010 the iPad was released and at the same time I saw the need to let users know about the amazing possibilities of the iPad. Although great strides had been made in accepting the iPhone and iPad as a tool for use in therapy, there seemed to be a lack of general education on using it as a therapist tool. Questions continually swireled around the web and at conventions: what happens if I delete the app? Can I use my iPhone app on my iPad? What is a universal app? Can I use the apps on my computer? That’s when GeekSLP was born. My first video taught viewers that it IS possible to run iPhone apps on iPads. Done with dark lighting, and not much planning. Today, one year later GeekSLP has had over 55 thousand views!

Many people have difficulty separating me as a developer and as an app reviewer/educator/blogger of the tech for SLPs. While Smarty Ears is a company that is behind me in the development of apps, I still felt the need to do things independently from the company. The need to teach about other apps that I like, and to teach about implementing technology. GeekSLP & Smarty Ears are like cousins with completely different purposes. GeekSLP gives free information (it is a free app) that could benefit almost all educational technology users by giving them tips to utilize their iDevices, while Smarty Ears is pushing Speech Therapy and education forward by creating apps.

When I started blogging ad video podcasting only a couple (and I mean TWO or so) SLPs were doing it- especially with focus on technology; today we have tons of blogs that want to discuss and review apps.

Is this the “ SLP APPidemy”?

If you search the key word “Speech Therapy” on your iPad you will see that we have 55 iPad apps for SLPs. I have created 14 of them. I have created a total of 25 apps between iPhone, iPad and Android apps! Five more in the works. I am currently collaborating with my fellow SLPs from Twitter has led me to start publishing apps for other SLPs with ideas like me.

If you search the keyword: physical therapy you get only 23 apps, and only 4 when you search occupational therapy; likewise you only see 14 when you search counseling. You may ask yourself: is the iPad having the same impact on these professions?

I believe the iPad is an enormous success partly due to the nature of our work: play based learning. Also due to the fact that we have been stuck in the stone age  with our materials: flashcards? worksheets? But also because the apps are available; I applaud all SLPs who have created apps for us.

Today the iPad is seen as the number one therapy box for many therapists. It is also the number one topic many speech therapy groups discuss online.  I have provided trainings all over the country and been invited for at least 10 state conventions for this year (and invitations for 2012 are also getting to my mailbox) to teach people about the amazing power of technology and the apps.

It has been an amazing year for my profession and me and I see that we are moving towards a more environmentally friendly, and engaging therapy set up. It was about time!  After 15 months developing apps for SLPs, giving training all over the world on the use of apps and iPad, I still always look forward making new geek friends online, presenting, and creating apps that make a difference.

13 thoughts on “Is the iPad revolutionizing Speech Therapy? From an SLP & app developer.”