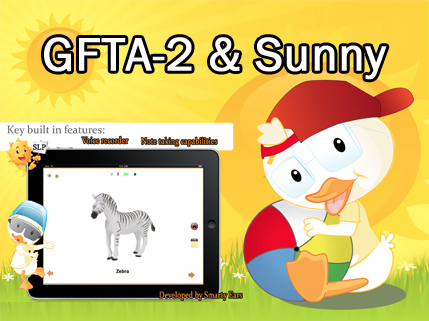 As a speech-language pathologist, I cannot even start counting the number of hours I spent analyzing the words produced by children to try to figure out the patterns in the errors of their speech. School districts many times require the determination of the presence of a disorder, which many times is attached to a score called the “Standard score” or the percentile rank ( %ile rank). In order to obtain this number, speech-pathologists administer a test by presenting a series of pictures and asking the child to name them. In the end, based on the number of errors produced by that child a standard score is obtained. In order to obtain a standard score the articulation test must be normed on the population.

In the school district I worked for we used the percentile rank lower than 7th to qualify children as having an articulation disorder. Despite the fact that this is still an arbitrary number ( why 7th not 8th?), this number many times determines whether the students will or not get services. This topic could lead to a whole new discussion for later on. After we obtain the numbers; our job as speech-language pathologists is not over; it is probably just beginning.

The first step is to analyze the words produced by the child like a puzzle and try to determine which sounds he is not producing or not producing correctly. We do this by transcribing the words produced by the child, and trying to find patterns. It is a fun task; but many times we just don’t have time for it. How amazing would it be if we could just do the test and everything is done for us? That’s already possible. I created an app about one year ago called The Sunny Articulation Test (SAT). The Sunny Articulation Test is not an standardized test, but it provides reliable qualitative information regarding a child’s articulation skills.

Over the past year I have started noticing that there is a strong correlation between one of the most utilized articulation test in English ( Goldman Fristoe Test of Articulation) and the results obtained with the SAT. This week I got an e-mail from another SLP who has done some case studies and found that Sunny corroborates the results obtained with the GFTA-2! This is really exciting. That’s why I have decided to post here my own case study I obtained 4 months ago and never published anywhere.

Student A is a two years and 11 months old male. He has been referred to evaluation due to concerns regarding his articulation skills. The Goldman Fristoe Test of Articulation was administered. Student received a Raw Score of 61; a Standard score of 71 and a %ile rank of 6. Administration time of the GFTA-2 was 20 minutes.

After administration of the GFTA-2, the Sunny Articulation Test was administered. Here are the results obtained:

Here is a comparison between the results. The main difference is that on the Goldman Fristoe Test of Articulation (GFTA-2)t I had to manually derive the data; while using the Sunny Articulation Test the data was automatically analyzed for me at the end of the administration. Both the Sunny Articulation Test and The Goldman Fristoe identified that the student’s biggest difficulties are on the medial and final position of the word. There were some slight discrepancies on the percentages. One very interesting thing to notice is that there was a 5% discrepancy for the values of Initial and Final position the word. This difference may be attributed to the higher number of trials in the Sunny Articulation Test.  See bellow comparison of possible trials based on position of the word:

The discrepancy in the percentage of accuracy may be due to the difference in the number of phonemes represented in the test. The Sunny Articulation Test has almost double the amount of opportunities for the testing the phonemes at the final position of the word. It also has one additional opportunity at the initial position and 4 at the medial position. More case studies are needed to attempt to determine a pattern of correlations between the GFTA-2 and the Sunny regarding the percentage of accuracy in different positions of the word.

There was a very strong correlation between the % of error type between the GFTA-2 and the Sunny Articulation Test.

There was a 2.1% difference between the GFTA-2 and the Sunny Articulation Test.

Based on this case study it appears that the results of the Sunny Articulation Test corroborate the results obtained from the GFTA-2 in its majority.

Disclosure: I have developed the Sunny Articulation Test by Smarty Ears.