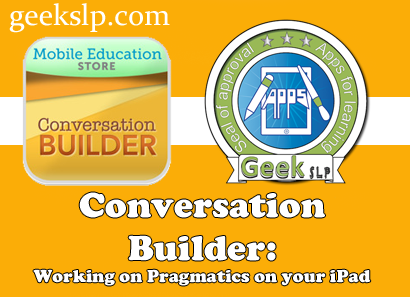 Conversation Builder was released in April of 2011 and it has received great reviews not only on the iTunes store but also from close SLP friends. This is an application for older students with difficulty engaging and taking turns in their conversation. Conversation builder allows you to build a profile for your students in order to keep data of progress overtime. The app has several modules available, each with different theme such as: animal theme, with friends around town, holiday theme conversation, water themed conversations, etc…

As you can see this app has received 14 5 star reviews!!! Impressive. I see also 3 “one star” reviews here. Given the fact that I have played with the app, there are only two explanations for these reviews, as the people who wrote these reviews did not even explain themselves as to “WHY in the world did you give this app ONE STAR!?”. First possibility: these are jealous app developers with fake one start ( believe me, this has happened a lot), or someone who purchased the app without reading what it is for.

I only have access to the basic Module that comes with you purchase the app for $4.99, so I cannot give any review on the other specific modules at this point.

How to set up the app:

1. Create a profile for your student.

The level of play depends on whether you have a group setting or 1 on 1 and the length of the conversation practice you want to have.

3. Choose the Conversation Initiator: This is BRILLIANT! You have the option of having either the student or the peer ( which in the case is “you” or the “iPad”) initiate the conversation.

4. Select the module to play.

In response to an outstanding app quality and value, Conversation Builder deserves the GeekSLP Apps for Learning Approval Seal. Click here to see a list of all apps that have received the Seal.

3 thoughts on “Conversation Builder: Working on Pragmatics on your iPad”