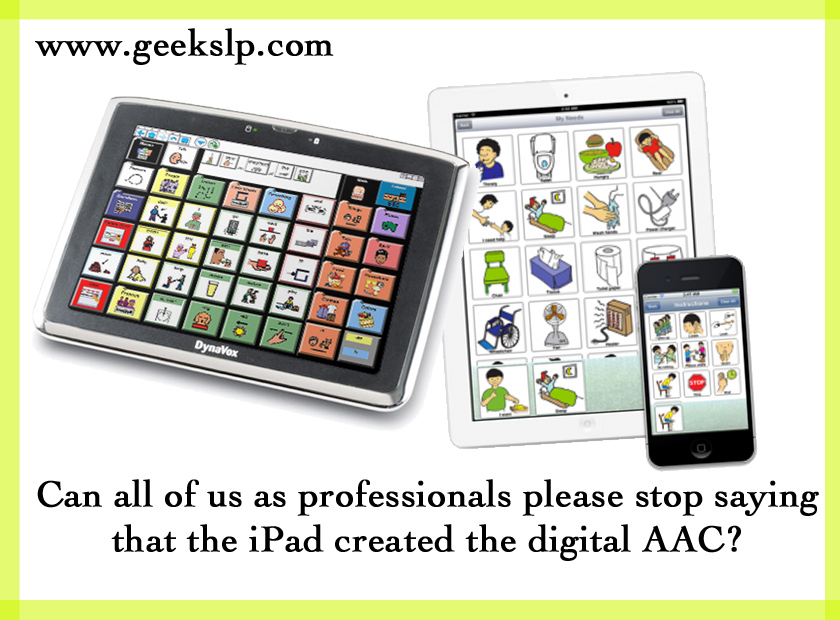 I have been meaning to write this blog post for such a long time, and with every new interview I see on television or read in the newspaper, the urge to correct this fallacy grows exponentially. Why is it that nearly every AAC app developer or professional being interviewed about the “miracle of the iPad as an AAC device” insists on saying that before the iPad apps, all that children had available to communicate was a set of paper based picture exchange communication cards?

Let’s agree on one thing, yes the iPad is for sure bringing a revolution in this field, but it cannot and should not take away the credit of its predecessors or invalidate the need for paper based picture exchange communication. Many people questioned my about where I saw this happen. Here is a video of one of the many times it has happened:

Most of you know me as an app developer and a speech pathologist. What most of you don’t know is that 8 years ago, I was providing services in Brazil, at a public institution when I received a grant to come to the US to learn about high-tech AAC devices and bring some solutions to Brazil. I remember that when I arrived in the US and started doing my internships at the various AAC service locations I was amazed by the various AAC devices available to children with limited communication skills. Before that, I spent 4 years in Brazil implementing AAC from pictures from Magazines (forget solutions like symbols! Even that was a nice discovery for me).

While professionals in the field should probably know that nobody miraculously came up with an AAC app that substituted paper based cards, people outside of the professional sphere are being led to believe that we went from cutting papers on a magazine to taping a symbol on the iPad and “giving the voice” to a children with speech delays.  While this may be a reality for countries where AAC devices are not readily available in schools or even exist, this is definitely not true in the United States. I know this post is centered around a reality that may not be the same for other countries, especially some countries that are not English speaking. If an AAC app is now available in Portuguese, it may well be that children and professionals went from only having magazine cut outs to having a full AAC app. The range of AAC devices, and its features vary significantly from one button with recorded voices, to devices with dynamic pages digital voices devices. They all have their place, either on the progression of teaching children to identify two dimensional images, to increasing their vocabulary size. The range of features can make the device more “potent”, but for sure each child has different needs; and while one child may be ready for an device with 11,000 symbols others will need to learn that a two dimensional image represents an object in real life. This is coming from someone who has creates a few AAC apps and also created a symbol set called Smarty Symbols that contains symbols used on various iPad apps.

Yes, the iPad has made digital alternative communication devices much more affordable, and this is by far one of the points we can credit the iPad for, which in consequence leads to benefiting children who were ready for a more advanced communication device but could not afford one. So, let’s make this point clear and easy… the AAC app you are using may have brought about a revolution on a child’s communication skills by allowing those who would not otherwise have access to a dynamic display device AAC device, or who were not interested in using one. So, at an individual level the iPad may have replaced the picture exchange communication symbols that were in paper format for children who had no access to a step up solution from the paper, but it came as an necessary evolution from existing AAC devices.

In sum, all I am trying to say is that the iPad has lots of benefits (which is a topic for another post) and has changed the lives of many children with autism and children with communication delays; but if you are going out and saying that you didn’t know of the fact that AAC devices with dynamic touch display existed prior to the iPad you should consider your skills in making children better communicators.

8 thoughts on “Can all of us as professionals please stop saying that the iPad created the digital AAC?”