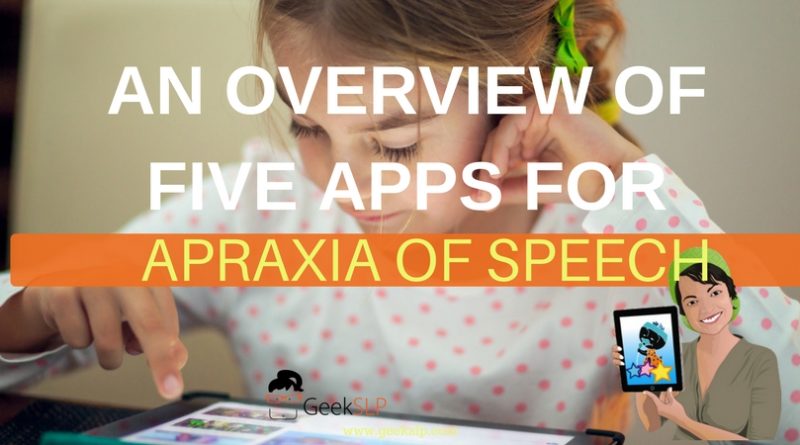 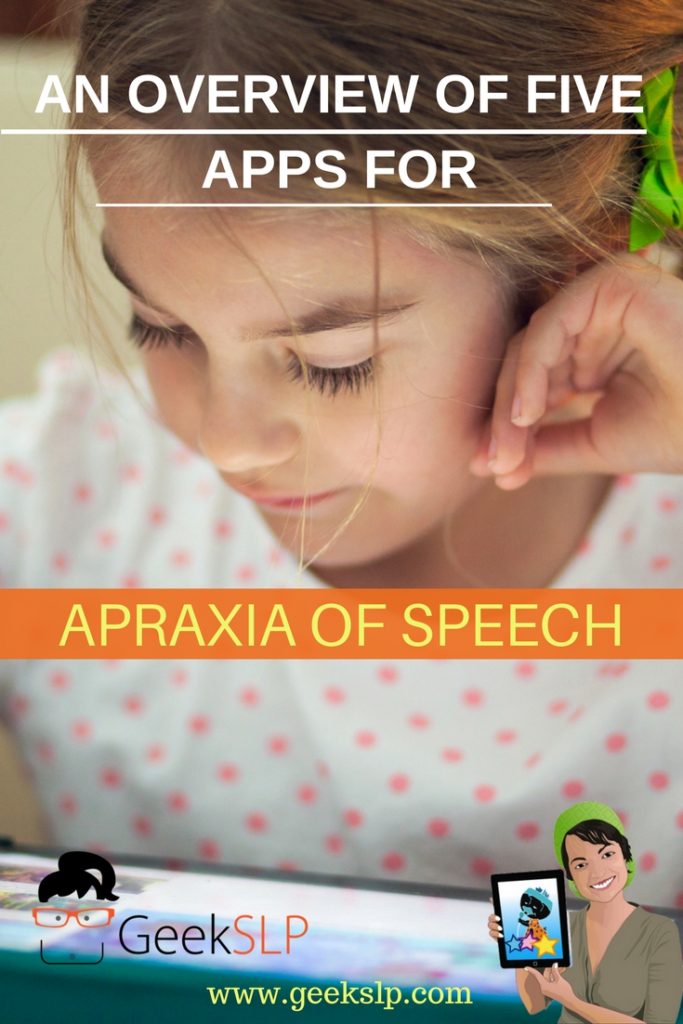 Apraxia of Speech is a speech disorder that affects the motor skills associated with speech. Children with apraxia have difficulty producing sounds, syllables, and words. Several apps have been published in the last year, which can serve as a tool for the intensive motor speech drill shown to be effective in helping children learn consistent sound production. One approach that has been shown to be effective is the initial use of words with less complex syllable structures such as CV & CV to words with multi-syllables. The ASHA website has a very structured page with more information on Childhood Apraxia of Speech. (http://www.asha.org/public/speech/disorders/childhoodapraxia.htm)

All the apps currently available in the iTunes app store reflect a structure that is in line with this approach. Last year I became very interested in developing a new app for apraxia, which has pushed me to learn and research the subject more than ever.. I own and have used about 95% of all the Apraxia apps on the apps store, and a recent discussion on Linkedin showed me that people would really benefit from learning the differences and similarities of each app. This blog post has a companion podcast where I demo the five apps discussed here. You can watch the GeekSLP TV #36 video here. (http://www.youtube.com/watch?v=H9PHAd1U3J0)

Let’s now take a look at what is available for you as a tool to help children practice:

Apraxia Picture Sound Cards ($179.99): Designed by an expert in Apraxia of Speech, this app provides practice at the word level using 775 real photographs. This application includes words organized by syllable structures such as CV, VC, CVC, CVCV as well as words by syllable numbers (one, two, three & four syllable words).

This is a comprehensive application, and it allows the adult to select which specific phoneme to target within the selected number of syllables . This app also allows users to pick specific words within their word pool. After the selection of the target, a series of pictures is presented. The user can tap on the app to have the written word displayed. A data tracking system is present and it allows the data to be saved over time. The cost of this app is on the higher end of the apps presented here. I believe the number of features and quality of the app should be taken into consideration when pricing apps. There are cheaper apps, which I will be discussing a little further but one must pay close attention to the simplicity of the apps. In the second activity the adult can select both target phonemes and syllable structures. To date, Apraxia Ville is the only app to include vowels on their phoneme selection list. Once a set of words is selected the images are presented and the adult can monitor productions by a using a built in scoring system. One other feature that is only available on Apraxia Ville is the ability to have multiple students working on different targets at the same time. The data is tracked and stored individually. A voice recorder is available on this activity. The third activity is the words farm, which targets practice for combining words. The adult can choose between two or three words per screen with the ability to target specific phonemes for each word.

Apraxia Ville allows the data to be saved on the iPad over time and exported to the Therapy report Center. Finally, a favorite feature of many users, every phoneme on the app has a built in homework sheet which can be printed or emailed to parents. Linguisystems Apraxia Cards: This application provides adults with sets of words organized by syllable structures; however, it does not allow for selecting specific phonemes. The app has two activities, a receptive activity called the “touch” and an expressive activity called “ say”. The expressive activity allows adults to collect and track data, record the child’s voice and includes various tips for spontaneous production of the target word. The data is tracked for each student and can be store on the iPad for monitoring progress in therapy.

Speech Therapy for Apraxia: This app, created by the National Association of Child Development, provides a slightly different selection style than the previously mentioned apps. In this app, the adult is able to select groups of words but not the syllable structure.  Levels are used to utilize a natural progression of difficulty for determining which words are targeted. As the student progresses through the levels, the number of repetitions and complexity of the words increases slightly. This app also provides a simple data tracking system that requires the adult to email the data obtained at the end of each session as it does not add each player to the application. The low cost of the application is a trade off for the number of features. This is not necessarily a negative comment, but one that we all need to understand when purchasing apps. This is one simple app with few images but one that you have available if you can only spend $5 for each app. See below a comparison of each one of the apps discussed here and the categorization of each feature included on the apps: If you would like to see these apps in action just watch episode #26 of GeekSLP TV ( the companion video of this post).

Disclaimer: I am the author & developer of Apraxia Ville. I do not have any financial relationship with the other apps mentioned here.