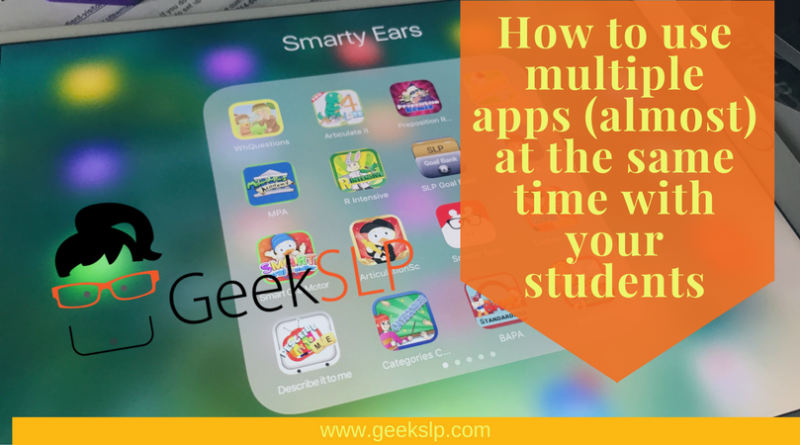 I remember those days when I worked with pre-schoolers and I had picked a great game for the kids to play. I do remember that more often than not one of the students in a group did not seem all that interested in that game. On those days I wish I was skilled enough to play multiple games at the same time, or that I could allow each student to play their own game in a group of four! But that just sounds crazy, right? Not with the iPad!

One of my favorite things to teach in my courses is how to use multiple apps during the same session. This very useful knowledge can be used in many scenarios beyond what I just described. You can use it when you are in a group and each student has a different goal and you need to use multiple apps, or simply when you want to switch between the game app and the articulation app of your choice for the same child. This can also be used when you are navigating between multiple apps for data tracking and visual stimuli.

You are able to switch between apps on any device running iOS 6.0 or higher. However, the way you do it varies slightly on the iOS 7.0 or higher. I will demonstrate it on the latest iOS 7.1 but users who have not yet updated their iOS to iOS 7.0 should be able to access their running apps the same way: by double tapping the home button or by sliding your four fingers upwards on the screen.

Preparing the iPad for the session:

Before your students arrive you can pre-select the apps for each student. Let’s say you have a very diverse group of students: Odin will work on her articulation skills, Jon will work on reading skills, and Victor will work on his inferencing skills.

Selecting the apps before the students arriving and testing the multitasking function is very important. The iPads have a running memory that automatically shuts down apps from running in the background if the app that you are currently using requires more memory. This prevents the iPad from crashing. Some apps require a lot of running memory and this will not allow you to combine multiple apps that require a lot of running memory. You can watch the video I recorded for an example of three apps that could not used together which would close the third app and you would have to set up the activity all over again.

I will pick three different apps for them:

Before they arrive, I will open each app and get it set up for them by selecting their profile on each app.

Once I have all the apps opened an ready to go, I can allow the Odin to take his turn by using Articulate it. Then I will double tap on the home button. This function allows me to see all the app I have recently opened and to switch to the second app easily: Once you can see the three most recent app, all you have to do is to select app #2 for Jon or app #3 for Victor. You allow Victor or Jon to take their turn and then you switch to the third app, and back to the first.

I have also created a video showing step-by-step on how this nice little trick works.

How to use multiple apps (almost) at the same time with your students from Smarty Ears on Vimeo.