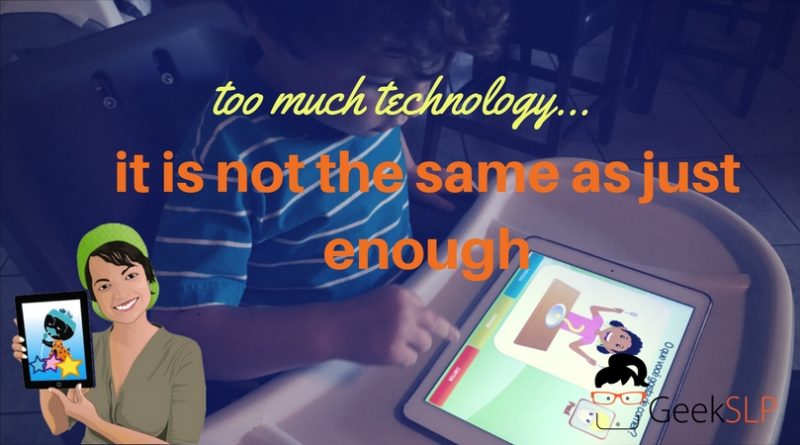 I am the mother of a 17 months old baby boy, a speech-pathologist, and a developer of educational apps for the iPad. This week’s trendy topic is “let’s bash tech” or “ all tech is bad” or even worse “ Let’s blame parents for letting young children use tech”. It may be thanks to a national campaign launched by Asha against the use of technology with young children, or even worse children in general. However, this campaign may be just a reflex of an overall fear of the new by adults. The fear is real, humans are afraid of the unknown, people are afraid that somehow children’s brains will not develop appropriately if they use technology before a certain age.

There isn’t a single Facebook post of my son using technology that does not get a comment of disapproval by a college professor of mine. I love her though. The fact is that my seventeen months old son has had more non-tech experiences than toddler his age I know. I am a true believer of providing my son with a variety of experiences. He is a pro-traveler, visited three countries, gone boating, petted many animals, gone on more playground than I can count, understands three languages, and has had a lot of experiences that I go above and beyond to provide. However, the minute I post a photo of those 5 minutes my son spent on an app that assesses receptive language skills for fruits and vegetables, everyone immediately thinks: how can she let a 17 months old child play with an iPad. I immediately get a sense that this is so bad; they may call child protective services (well, not that bad). This also comes  right after a friend of mine told me that her pediatrician prohibited her from offering the iPad at all to her 20 month old twins.

There is a general notion that books are always better than anything else. Books simply meet the criteria for “excellence”, while technology meets the criteria for “distraction”? How can we not agree that there are plenty of very enriching educational apps, that can provide an experience that maybe, just maybe a fiction book can’t.

I am a Portuguese speaker, and technology has been my best ally in trying to provide my son with additional exposure to Portuguese via songs and activities on the iPad. I have not spoken Portuguese for the best part of the last ten years, my Portuguese vocabulary is very deficient and I clearly cannot even label all my fruits in Portuguese without some help. Please know this is just portion of what I do to provide him as far as exposure to the language. I have so many books memorized because I read to him every night. I even got involved in a Brazilian Parenting Play group ( I would never have guessed).

People tend to assume that because you allow your son to list to music (music on TV is technology) or play on the iPad, you don’t let him do anything else: You don’t read books to him, you don’t talk to him, you probably just sit playing angry birds on your phone while your son uses the iPad. HELLO! I do it all! It is possible to provide a child a balanced experience to everything in life, including access to technology.

When did using the iPad for x amount of time became opposite of talking to your child?

Generally speaking, there are very few things I despise more than generalization. One thing however is true: too much of anything is not good for anyone, right?

On the same token, I am also aware that individual experiences cannot, and should not be used as a basis for what others should do. Just because someone’ son watched TV all day and grew up to be a productive professional, does not mean it is OK for every child to watch TV all day. Hell, it is not ok for an adult to watch TV all day.

The iPad has allowed me to tech my son an immense amount of vocabulary words in Portuguese, which today translates to not only him, but the both of us knowing all our fruits and vegetables in three languages.

I wonder if the people who bash technology for children so much have had the time to differentiate the good versus the not-so-good tech. Not all apps are made equal that’s for sure. That’s right, there is a huge difference on my book in which apps the child is using. Are we offering tech time on a passive TV style app or an app that allows children to increase vocabulary, interact with the screen, work on fine motor skills, and perception? Is the app something that requires the participation of an adult and therefore stimulates language?

Many people and even professional also assume that if the child does not have access to technology, they will be doing something “ better”. Has it not occurred that it is possible for the child to be just sitting somewhere without any stimulation whatsoever? Would I rather have my child learning new vocabulary words via an engaging app a few minutes per week or sitting on a high chair for 20 minutes while a do the dishes? While this is not one of my own behaviors ( because my son will not permit lack of stimulation), I have personally observed many children on the highchair staring at the wall for several minutes and are very happy about that.

While many might think, I am defending the use of tech for young children because, well, I make apps. The reality is I have created apps that primarily require the participation of an adult, and up until this year all my apps were for children ages 5 and over. This year however, I created an app that catered to my son’s interest: to learn colors and the name of animals.

For months I tried to teach my son to point, despite all my efforts he always wanted to point with his entire hand, it wasn’t until he had to start using one finger to activate the images on the iPad that he started to use his index finger to point.

All this comes from the mother SLP in me, however, I could spend another thousand of words on the fact that for many children with communication delays, tech is what allowed them to express themselves. However, this is a point for another post.

I love debating when people are capable of avoiding generalization and have had the chance to see things in all angles possible. My two cents is not all tech is bad, some tech is not the same as full time tech, and finally exposing children to technology is just part of raising a balanced and well rounded child. 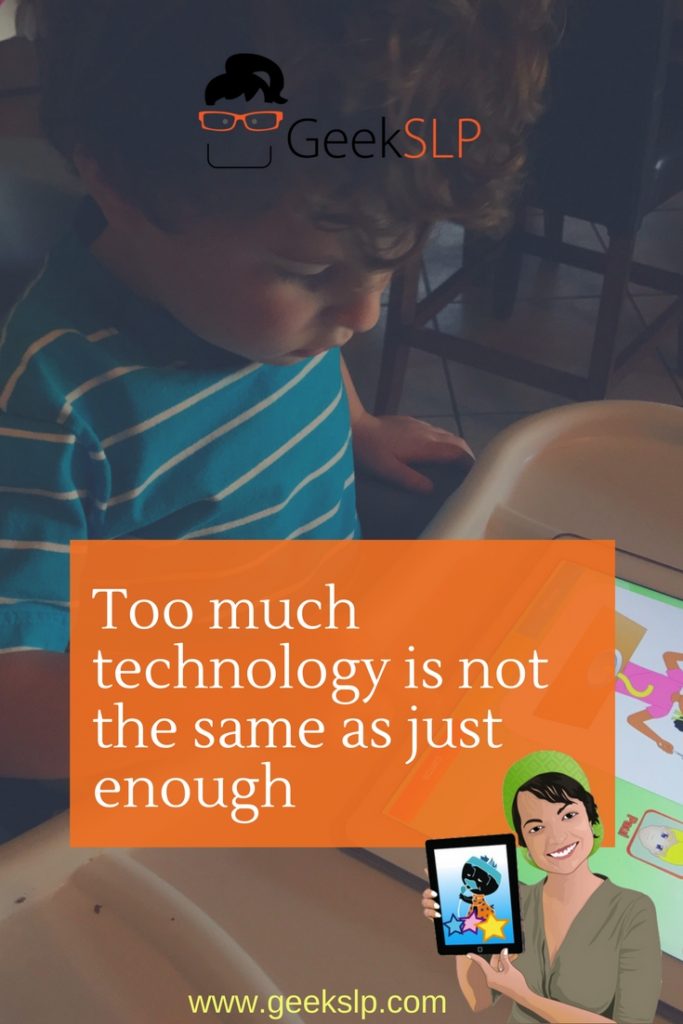