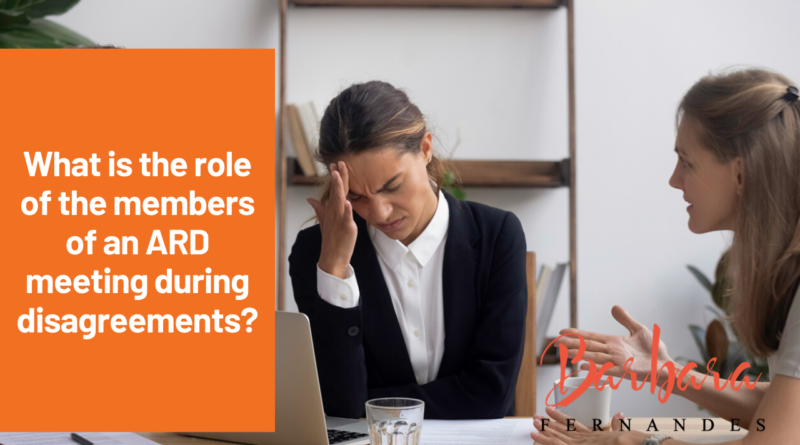 For years you have read my blog posts as a professional. Today, I am re-starting my writing process with so many topics in mind; not as a professional, but as a mother of children receiving speech therapy services. I have attended several Admission, Review and Dismissal (ARD) meetings. Many more as a professional than as a parent. As you can imagine, the parenting path is without a doubt more challenging. It has pushed me to ask questions that had never crossed my mind before and I want to write today about a very valid question: What is the role of members of an ARD meeting when there is a disagreement between one member of the ARD and families? I want to explore possible scenarios and get you thinking.What you will read here comes from a recent personal experience.

“The Individuals with Disabilities Education Act (IDEA) requires schools to reevaluate kids with IEPs at least once every three years.” (Understood.com)

The evaluation is conducted by a team. Team members vary depending on the disability in question. Today, I want to talk about the team typically involved for a child with a previous diagnosis of Autism. The team typically includes a speech-language-pathologist, a diagnostician, and a school psychologist. These professionals include information provided by the classroom teacher and the parents in the decision making of a diagnosis, as typical individuals who spend the most time with the child. After the evaluation is completed, the team meets at what it is called Admission, Review and Dismissal (ARD) meeting so that the professionals can go over the results and discuss plans for validating or removing an existing eligibility, and how the team proposes to support the child’s learning for the rest of the year.

The meetings include everyone who was part of the evaluation, plus other team members: classroom teacher, parents, and the school administrator ( principal or vice-principal). At the end of the meeting, every team member is asked: Do you agree with this document? Members then go one by one stating verbally if they agree or disagree. During our last ARD meeting we entered a disagreement with the school district. Our disagreement was primarily relating to obvious flaws in how the speech-language-pathologist conducted her evaluation and determined dismissal of eligibility.

After three ARD meetings in which we, the family, could easily point out the flaws, get people to wonder about the data (or at least not be 100% confident), every single member of the school team, including people who, for obvious reasons, could not agree to the actual data on the document, still verbally said : “I agree” at the end of the meeting leaving the parents (us) the only party to disagree with the school. As I calmed down, and had time to think about every member on the meeting I wondered: Do they know what they just agreed to? Would they have changed their statement if I had simply asked them a couple questions such as “Do you know what you are agreeing to?”, ” Do you know that you are agreeing to remove the eligibility of speech impairment of a child with Autism?”.

I will never know the answer to those questions as time is fleeting. However, it did not get me to stop thinking about it. What would happen if I had actually asked the question and given a few minutes for members to think? My wondering mind, had more questions than answers and it still does:

Are school members of an ARD committee “obligated” to side with the school or feel the pressure to side with the other school professionals? This is a real question that I do have and will likely have for a long time until I can actually read some responses to my post. I wonder how it must feel for any member to side with families against the rest of their co-workers. Let’s imagine for a second that the disagreement was obvious and the choice for that ARD member also obvious. How can a committee function if members feel pressured to always side with the employer? How is the school not failing children constantly by not giving members a clear picture of what they can and cannot agree to. It is a tough situation to be in and I am thankful I was never in that place as a professional, but as a parent I can tell you this became a big concern. Who is the real impartial member of this committee in time of disagreement? In our case, everyone who was on the fence ultimately sided with the school. Is this an isolated incident or is this happening in school everywhere in America?

How responsible should ARD members be to understand the information presented to them so that they can make an educated decision? Many times school administrators and classroom teachers don’t have the expertise needed to judge who is right and who is wrong in an argument. Educated families argue X, ARD team member argues Y. Given that there is an enormous range of disabilities, from Auditory Processing Disorders, to Autism, to articulation; how much should we expect that classroom teachers and administrators understand what they are deciding? If they are making a major decision for a child, should we expect them to learn more, ask more questions? In our case we were discussing very technical aspects such as test selection, test scoring, etc. We can’t and shouldn’t expect non-experts team members to understand, but here we still expect them to make choices. My question is again, where is the impartial party?

These questions become even more valid when parents request an IEE (Independent Educational Evaluation) after a disagreement, because eventually the team members will be faced with new data that may validate the parents side and how will they handle conflicting recommendations?

If you have been a member of a “disagreement ARD” – how did you handle it? I would love to hear from you.